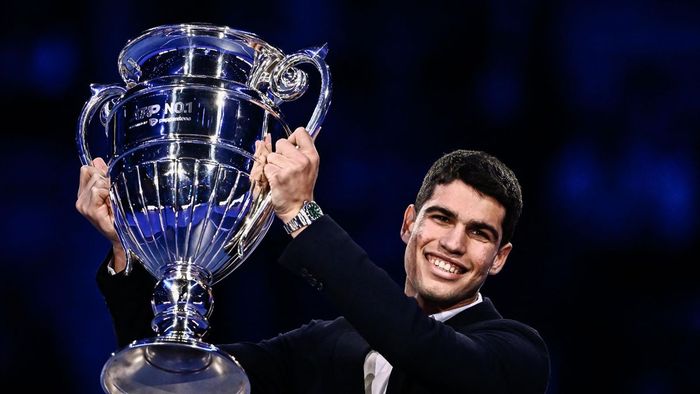 As you know, Carlos Alcaraz could not take part in the ATP final this year due to an unfortunate injury, but the tennis player was present in Turin.

The Pala Alpitour was the stage where the player received the trophy that only one player lifts every year, No. 1 in the ATP world after over 11 months of competition.

The defeats of Nadal and Tsitsipas in the main tournament meant that it was not necessary to wait for the ATP final to know that Carlos Alcaraz would end 2022 as world number one.

Before Wednesday’s match between Tsitsipas and Medvedev, the Spaniard received a well-deserved honorary award for becoming the youngest player in history to finish a season at the top of the ATP rankings.

“First of all, I have to apologise for not being able to play here, but my injury prevented me from doing so. It has been very hard to achieve this incredible trophy that means everything to me. I would like to thank everyone for helping me to achieve the dream of a little boy from Murcia. To my family and also,”Alcaraz said to the Italian public.

Alcaraz, to the surprise of many, assured that he picked Nadal to win the tournament, although a hypothetical victory of the Spaniard would have snatched the first place in the ranking

Sad for not being able to play the ATP Finals because of his abdominal injury sustained at the Paris Masters 1000, the Spaniard was ambitious about what he expects from his tennis career.