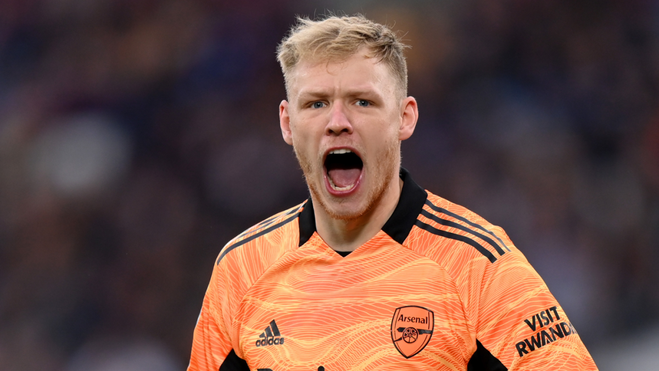 Arsenal goalkeeper Aaron Ramsdale has been given the number 1 shirt ahead of the 2022/23 season.

As you know, the number 1 shirt has traditionally always been worn by the first choice goalkeeper, and Ramsdale finally got the opportunity to wear a shirt.

Ramsdale, 24, arrived at Arsenal from relegated Sheffield United last summer. The player was bought in the amount of about 30 million pounds.

The goalkeeper was forced to take the number 32 shirt due to Bernd Leno already holding the number 1 shirt, despite Ramsdale being the top goalkeeper for most of the season.

Brand Leno is known to have left Arsenal to join newly promoted Fulham for a fee of around £8m.

This vacated number 1, which was now given to Ramsdale.

Rumdale expressed pride after the club gave him the number 1 shirt. He was quoted as saying:

“I’m very proud and honoured to be taking this massively prestigious number. Some of the greats have worn this shirt and hopefully I can emulate how they performed on and off the pitch and also add a twist of my personality to it as well.”

“To Bernd Leno, I wish nothing but happiness and greatness on your new adventure. Thank you for showing me the ropes and I hope I can hold myself as graceful as you did in the shirt.”

Ramsdale made 39 appearances for Arsenal in 2021/22, including 34 in the Premier League. The 24-year-old kept 12 league shutouts last time.

Arsenal were able to get rid of Bernd Leno after the arrival of Matt Turner earlier this summer. The American goalkeeper came from the MLS New England Revolution team.

It is worth noting that Runar’s third goalkeeper Alex Runarsson also remains at the club.