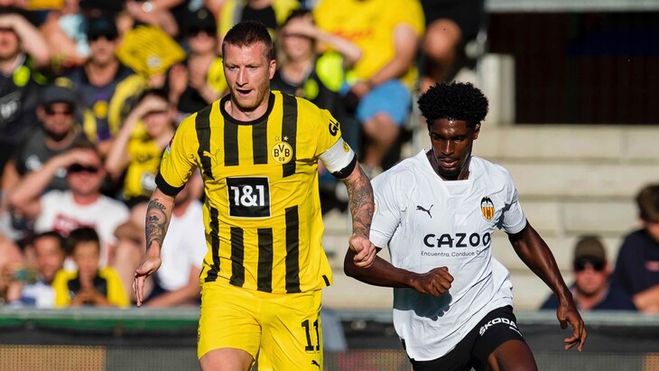 Borussia Dortmund was defeated by the Spanish Valencia (1:3) in a friendly match held in the Austrian Altach.

The account was opened in the 40th minute. Valencia caught the opponent on the counterattack. Castillejo ran down the right flank and gave it to the center for Guedes, who shot with one touch. After a rebound from the defender’s leg, the ball flew right under the crossbar.

At the 51st minute, a penalty was awarded to Valencia. He burst into the penalty area from the left flank at the speed of Bayno-Gittens and got hit in the legs by Diakaby. Confidently converted a penalty Marco Reus.

In the 58th minute, Valencia doubled their lead. Musa threw Solera into the penalty area of Borussia, who jumped out one on one with the goalkeeper, but did not beat, but threw it across to Marcos Andre, who already scored into an empty net.

The third goal was scored in the 62nd minute, after Guedes received the ball and in front of the Dortmund free kick after a pass from Soler, shook the defender and scored the ball exactly into the far nine.

What’s next for Borussia Dortmund and Valencia?

Valencia will play Stuttgart on 23 July next. Borussia Dortmund will face Villarreal on the 22nd.