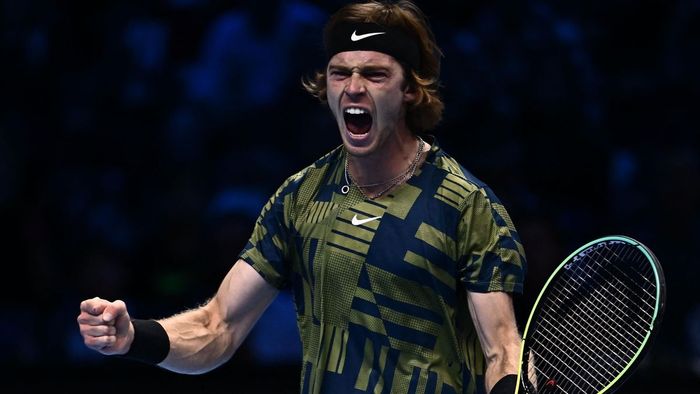 Russian Andrey Rublev will play against Norwegian Kasper Ruud in the semifinals of the ATP Finals. The match will take place on November 19 in Turin, starting at 20:00 GMT.

Casper Ruud reached the semi-finals for the second year in a row in the final tournament. And against the background of the autumn results of the Norwegian, this can be called a good success.

At the same time, Kasper left the group ahead of schedule. In the first round, the finalist of the US Open-2022 won against Felix Auger-Aliassime, and in the second – against Taylor Fritz.

And these victories are valuable, first of all, because Ruud stopped his opponents with a great serve. As known for Rafael Nadal, this task turned out to be unsolvable.

At the same time, Ruud lost to Nadal in the third round, but this match did not decide anything for him in terms of the tournament. But the Norwegian tennis player was still upset – as the tennis player lost all nine matches against opponents from the top 3.

Andrey Rublev, meanwhile, for the first time in his career, reached the semi-finals in the final. Before that, the tennis player could not leave the group for two years in a row.

Andrei, perhaps, was rightly called the main outsider of the group, in which three former winners of the final tournament were together with him.

Least of all, I expected some kind of success, and perhaps it helped, said the Russian after a meeting with Stefanos Tsitsipas. Psychologically, Rublev is really easier than his rivals.

Tennessee won a strong-willed victory over Tsitsipas. After a weak first set, he played incredibly powerfully in the second and third games.

Both tennis players played each other 6 times. Rublev leads Ruud 5-1 in head-to-head matches. The last meeting ended with the victory of the Norwegian with a score of (2-1).

Rublev confidently leads in head-to-head confrontations with Ruud with a score of 5-1. Andrei is currently in excellent shape – at the group stage he defeated two representatives of the top 5 world rankings Medvedev and Tsitsipas.

Rublev, perhaps, looks like the best option in this pair, but Ruud is also now in excellent shape and he will not give up the victory to the Russian just like that.

Prediction for this meeting: Total sets over 2.5.