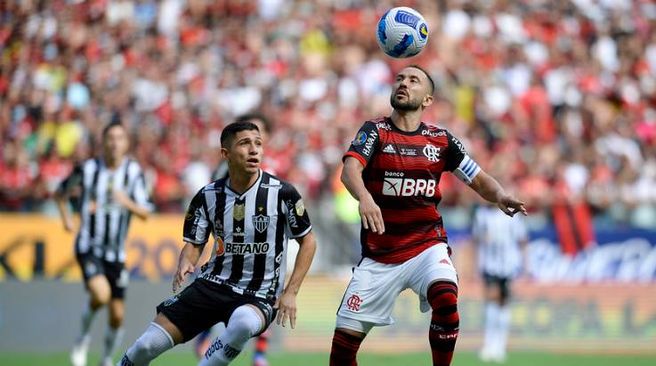 Flamengo will host Atlético Mineiro in the second leg of the 1/8 finals of the Brazilian Cup. The fight will take place on July 14 and will start at 00:30 GMT.

Flamengo in the current championship of Brazil after 16 rounds is in ninth position in the standings, with 21 points in the asset. It is seven points behind the third line.

In the last round the club lost away to Corinthians 0:1. This defeat broke the club’s run of four wins in a row in various tournaments.

In a successful period of four victories, the club won two victories in the national championship, and twice defeated the Colombian Tolima in the 1/8 finals of the Libertadores Cup.

In the Cup tournament, Flamengo has already overcome one stage, having twice beaten the representative of the third league – 2:1 and 2:0. And in the first match against Atlético, the club lost on the road with a score (1:2).

Atlético Mineiro is fourth in the Brazilian league table with 28 points. The club is two points behind the leader.

The club is approaching this match with a 9-match unbeaten streak. During this successful period for themselves, they were able to get five wins and four matches ended in a draw.

In his last game played, Atlético drew 0-0 with Sao Paulo in the national championship, and earlier he defeated the Ecuadorian Emelec in the 1/8 finals of the Copa Libertadores and reached the quarterfinals.

In the current draw of the Brazilian Cup, Atlético Mineiro, which is the current owner of the trophy, has also already overcome one stage, defeating the team from the fourth league twice in the 1/32 finals – 3:0 and 1:0.

Usually in these meetings between these teams, goals are scored from both sides. Our prediction for this match is both clubs to score – 2.00.