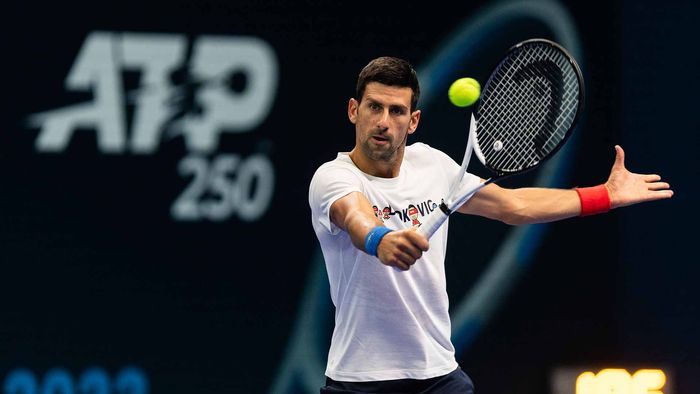 Serb Novak Djokovic will play against Spaniard Pablo Andujar in the second round of the tournament in Tel Aviv (Israel). The match will take place on September 29, starting at 15:30 GMT.

For Djokovic, it has been a difficult year, although he has also had some memorable triumphs. A visa scandal earlier in the year ended with his deportation from Australia, causing him to miss the first Grand Slam of the season.

Djokovic was unable to compete in the Indian Wells and Miami Masters due to current vaccine requirements. The tennis player crashed in the second round of the Monte-Carlo Masters, finished second at the Serbian Open. The Serbian lost to Carlos Alcaraz in the semi-finals of the Madrid Open.

Also won his first title of the year at the Italian Open, but the title defense at Roland Garros ended in the quarter-finals. After winning his 21st Major title at Wimbledon, he was once again unable to compete in North America due to a valid vaccination mandate.

The former world number one returned to action at the Laver Cup. Djokovic won the singles and doubles on the second day of the tournament, but lost his singles match to Félix Auger-Aliassime on the third day.

As you know, Pablo Andujar met Thiago Monteiro in the first round of this tournament. Both tennis players remained fairly consistent in serving for most of the opening set. The Brazilian made a break in the ninth game and increased the score 5:4. However, he broke down in the next game as he failed to pitch a set.

The set soon went to a tie-break and Andújar got the upper hand to take the set. The second set was one-sided: the Spaniard played six games in a row and won the match with a score of 7:6 (3), 6:1.

It was only the Spaniard’s third win at the ATP main draw level in the past six months. Recently, he has performed mainly at the Challengers, and at the same time, not very successfully.

Djokovic leads Andujar 2-0 in head-to-head matches. He won their previous meeting at the 2012 Indian Wells Masters in three sets.

Andujar performed well in the previous round and completely outplayed the opponent in the second half of the match. If the tennis player can show the same intensity, he can put some pressure on the Serbian.

Djokovic recently revealed that he had been struggling with wrist pain for some time. He managed to win the Laver Cup match against Thiafo quite convincingly, but it looks like he was thwarted by a loss to Auger-Aliassime.

If it’s something too serious, it could affect his performance against Andujar as well. Although Djokovic hasn’t made too many hard court appearances lately, he looked pretty good in the Laver Cup until his injury became a problem.

Prediction for this meeting: Djokovic’s victory with a handicap in games (-7.5).