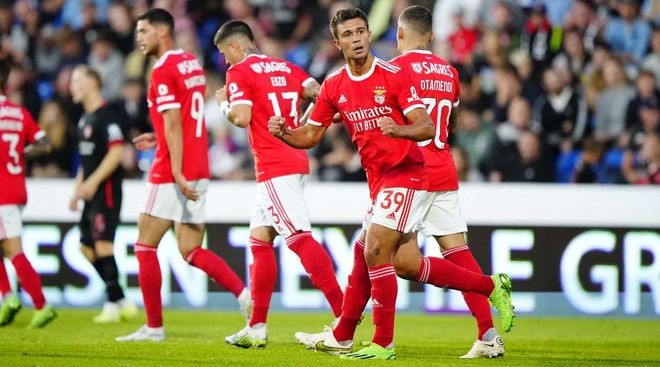 On Tuesday, August 23, Benfica will host Dynamo Kiev at home in the second leg of the Champions League playoff round. The fight starts at 19:00 GMT.

The first leg, which took place last week at the Mejski LKS Stadium in Poland, ended in a (2-0) victory for Benfica thanks to goals from Gonzalo Ramos and Gilberto in the first half.

It’s a victory Benfica have maintained their 100 per cent record in all competitions this season.

The team from Portugal started in the Champions League from the 3rd qualifying round. At this stage, Benfica beat Midtjylland (7:2) on aggregate.

Meanwhile, Dynamo started their qualifying campaign in the second round, beating Fenerbahce (2-1) on aggregate.

They then made short work of Strum Graz in the third round, beating them (3-1) on aggregate.

So far, they have scored two goals each in two qualifying away matches.

The team will need a similar performance to make up for a two-goal gap away from Benfica.

The hosts have no new absentees as Lucas Verissimo and Joao Victor have both been sidelined with injuries and are only expected to return to the squad next month. The team will have a strong squad for this match.

Vladimir Kostevich and Vladislav Supryaga are out of action due to injuries and will not be able to play in this match. Denis Garmash and Sergey Sidorchuk returned after disqualification.

Only a miracle can save the Kyiv club. Dynamo need to score 2 goals and take the game to overtime. But Benfica is a very strong club and they want to get into the group stage.

The match will also take place at the opponent’s territory. The Ukrainian team will play open football, so we can expect many goals in the second leg of the Champions League playoffs.

Prediction for this match: over 2.5 goals.